After a successful installation and test in the desert near the city of Sweihan in United Arab Emirates, the first version of the S.A.W.E.R. system is getting prepared for its return to the Czech Republic. The disassembly will take place in the first week in January and the device should be back at the place of its creation at the University Centre for Energy Efficient Buildings of the CTU at the beginning of February 2020.

The experimental system has shown that it is possible to produce water from air in an absolutely autonomous way without consuming external energy even in a desert environment. After the endurance tests and the experience with an installation in desert, we already know what to improve and to simplify so that future versions will not require so much time, and they still work reliably. We suppose that we will send the S.A.W.E.R. back to desert for another trip when the modifications are finished.

As the works at the EXPO 2020 fairground in Dubai progress, the time of installing the second S.A.W.E.R. system that will be placed in the technical room of the Czech national pavilion is getting closer, too. At present, the sorption unit that has been produced is already located in the CTU UCEEB laboratories where the whole system will get completed until end of this year.

Experience from the Sweihan desert was used when designing the S.A.W.E.R. unit for the Czech pavilion. Its installation at the EXPO 2020 fairground is expected to take place before the end of February. Unlike the system that has been tested in the desert, this version will be larger and more powerful. The water produced will be enriched with nutrients from a special photo-bio-reactor and it will be used for the garden irrigation system around the pavilion. 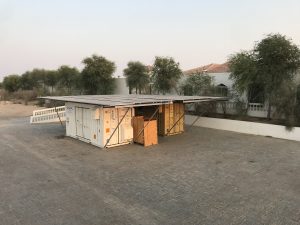