The autonomous unit generates drinking water in the dry hot climate
which can be used for consumption, feeding livestock or for plants irrigation.

The unit works using the principle of adsorption and desorption of air humidity. Its main part is the sorption unit with a desiccant exchanger that allows for dehumidification even of air with low content of water vapor that can be found in desert conditions. Extracted water molecules accumulated in desiccant are then released at high temperature to smaller amount of air to increase its humidity. High humidity from the air then condenses on the built-in cooler in the unit as liquid water. This way, it is also possible to get water in desert conditions where ordinary condensing coolers do not produce any.

The S.A.W.E.R. autonomous unit consists of two containers – production and energy ones. The production container comprises the sorption unit, water reservoir, and a plant for treatment of the drinking water. Energy container comprises the battery repository, storage tanks for heat and cold. The solar roof is constructed over both containers. By connecting the roof with the containers, it is possible to produce and supply the drinking water autonomously without a connection to energy grid. The outside dimensions of the containers in the top view are 2.4 × 6.0 m and the height is 2.9 m. 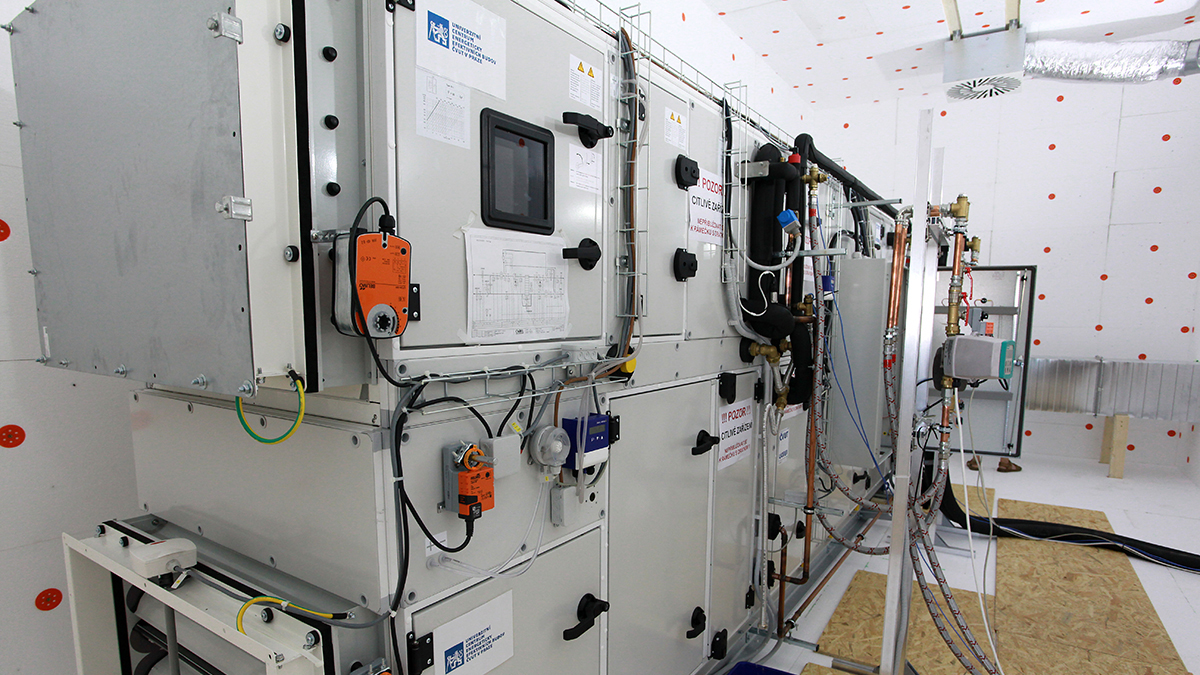 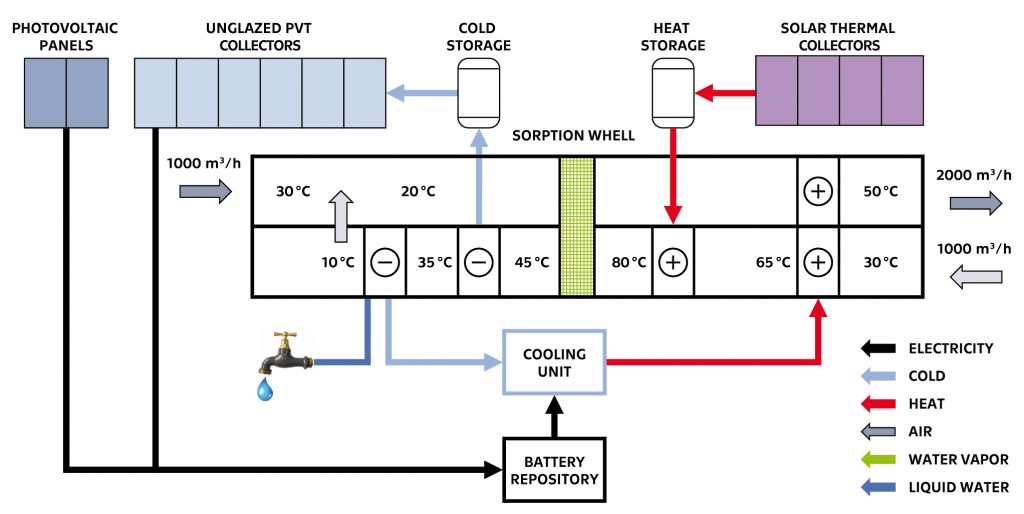 The S.A.W.E.R. unit can be operated in a totally autonomous way without the need of energy from external sources. The energy for its operation (electricity, heating. cooling) is taken from the local environment by solar roof. The energy is stored in the battery repository and the storage tanks of heat and cold.

Therefore, the S.A.W.E.R. unit is suitable for areas without any infrastructure at all. The technology is optimized for operation in hot and dry climates (deserts); however, the process can be also adapted for other areas.

The S.A.W.E.R. type unit uses the total flow rate of outside air of 2000 m3/h and its average daily production is 100 liters in the dry and hot desert environment (climatic conditions of Riyadh) in autonomous operation. In such environment, the S.A.W.E.R. unit production of water, as compared to ordinary condensation-only units, about eight times higher. In case of typical desert conditions (air temperature: 30 °C, relative humidity: 20 %), the S.A.W.E.R. unit produces 8 liters of drinking water every hour, while mere cooling of the air using a cooler with the surface temperature of 5 °C does not produce any water at all.

CZECH OASIS AT THE EXPO 2020 IN DUBAI

The S.A.W.E.R. system for the pavilion representing the Czech Republic at the EXPO 2020 world fair in Dubai is a result of cooperation of the University Centre for Energy Efficient Buildings of the CTU in Prague and the Institute of Botany of the Czech Academy of Sciences. The unit with the production capacity of 500 liters of water per day that uses the same technology as the container version is designed as a part of the pavilion technology and it will irrigate the oasis growing from the sand around the pavilion. Getting water from air and cultivating the desert into fertile garden will be the central exhibition topic of the Czech pavilion. 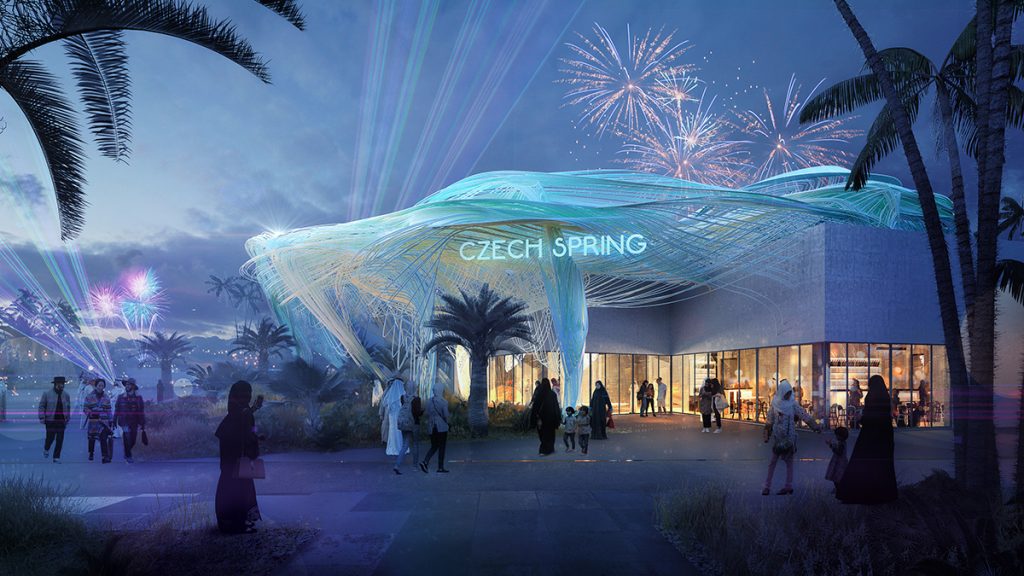 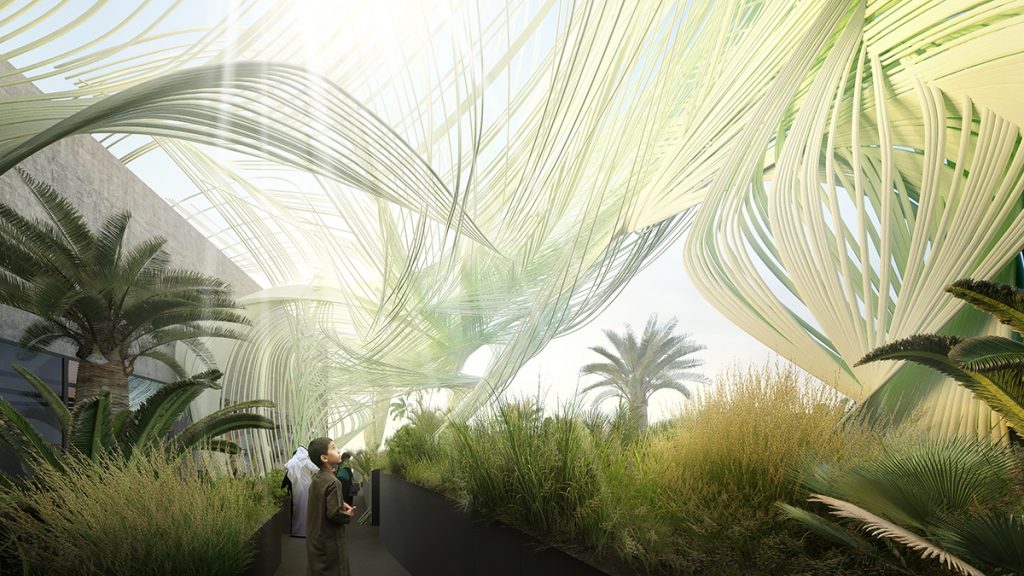