The device used for extracting water from desert air, developed by the University Centre for Energy Efficient Buildings in cooperation with the Faculty of Mechanical Engineering of the Czech Technical University in Prague, has already succeeded in several national and international competitions. Currently, the preparation of its third prototype is underway in cooperation with Karbox from the Czechoslovak Group holding company, funded by the national OP PIK Applications project, which is co-financed by the European Union.

Another, the third prototype of S.A.W.E.R. device in a row, is aimed at use in a real environment. It builds on the previous two prototypes, the first of which was tested in autonomous operation in the desert, while the second was a fixed part of the Czech national pavilion at EXPO 2020 in Dubai. We plan to complete the latest version in the beginning of the year 2023.

The first autonomous prototype of the technology has been extracting water from the desert air since last year at the Rochester Institute of Technology Dubai after being upgraded. Here it serves local students and, as a pilot unit, potential applicants. The second prototype, unveiled at the EXPO 2020 international exhibition in Dubai, has since moved to Ras Al Khaimah University in the United Arab Emirates and will be made available early next year.
Dozens of companies have already expressed interest in S.A.W.E.R. technology. We are currently in consultation with a selection of these companies, on the basis of which we will decide on the sale of the licence.

The technology is very popular in our country and in the world and has won several awards: 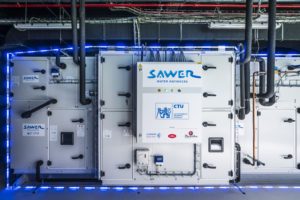